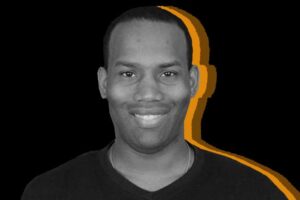 Darlington, South Carolina native, Jacoby DuBose, got his start as a “Creative Engineer” at the prestigious Mayo High School for Math, Science, and Technology. His freshman, sophomore, and junior years DuBose completed dual enrollment courses at Mayo High and Florence-Darlington Technical College — focusing in the areas of Computer Science and Physics. With the help of his parents insisting he not graduate after his sophomore year, Jacoby discovered he could excel in engineering and the arts. He became a very accomplished jazz pianist — performing and recording with many top US R&B, hip- hop, and gospel artists. Though he only competed in track and field his senior year of high school, he became nationally ranked in the 110-Meter-High Hurdles and received an athletic scholarship to Howard University. DuBose wanted to major in Computer Science until a meeting with former General Motors executive, Edward T. Welburn, changed his mind. Welburn studied design, sculpture, and painting at Howard University and it lead to him becoming Vice President of General Motors and having a successful career in film. Filled with inspiration from Welburn, Jacoby chose to major in Electronic Studio — a major that allowed him to combine his knowledge in Computer Science and Physics with his talent in music and film. Jacoby also earn awards All-MEAC, NCAA All East Region, NCAA All-American, and Howard University Track and Field MVP awards. After competing around the globe as a US Olympic Development Athlete for five years, DuBose took his talents to the classroom. He led distance learning teams, taught computer science and physics, and completed research at Old Dominion University, Hampton University, and the Governor’s School for Science and Technology in Hampton, Virginia. Teaching sparked his thirst for developing ideas and led DuBose to become a serial entrepreneur. He has also served as Director of Virtual Programs and Innovation at the Cleveland Institute of Music. Utilizing his skills as a film director, music composer, animator, and computer scientist, Jacoby is showing the World, Creative Engineers do not have to limit themselves to traditional career pathways

Return to more information about the 2022 event